My first trip to the Iberian Peninsula in November 2017 in the midst of the Catalan independence protests. I really wanted to visit also the Basque Country, more of Andalusia and see Gibraltar, but the route was becoming quite long instantly, so for the first time I decided to focus on main cities of Spain and Portugal, and then visit the rest on separate trips. But still managed to visit Andorra, a little country in the north.

The subway line begins right from the airport, very convenient. All stations have such walls with sliding doors.

Made it to the sunset. Barcelona waterfront looks great even at night.

Top view of the old center.

Some are carefully packed with a spoon in plastic, for people who want to buy them to eat right away.

First hints at the crime rate in Barcelona.

Waterfront in the daytime. Lots of space, it’s really cool compared to those narrow lines in many other countries.

Shopping mall right on the waterfront.

Went to the famous Ciutadella Park. Nice, but noisy, many tourists around.

Streets of the old town are often quite shabby, but have a cool vibe.

I was looking for a place to dine, and around half of venues are clearly touristic, even their menus are in German and Russian.

Plaza Catalunya. Usually this is where all independence protests begin.

Newer parts of the city are surprisingly well organized in such blocks. Cut corners look not only aesthetically better, but also allow you to remove blind spots at intersections.

One of the houses of the architect Antoni Gaudi.

Level differences on the roof, and a well inside.

And this is how ordinary houses look like. No concrete blocks, even typical buildings are beautiful.

In the new center, it becomes more noticeable that Barcelona is a modern and vibrant city. 😀

With all, even negative, attributes of this. Homeless people sleep on the streets, beggars around.

Text in Catalan says “We live in the neighbourhood, no speculation” which refers to the high housing prices in the city, caused mostly by tourism.

Reminds me Paris a bit.

Came to the contemporary art museum hoping to find something impressive, but it ended up as always. 😀

To some extent maybe.

The protest for the independence of Catalonia. They happen every day, but recently the leaders of the movement were arrested, so now the protests are more widespread.

Sagrada Familia in the sunset lights. The cathedral was designed by the local architectural star Antoni Gaudi, and has been under construction continuously since 1882, making it one of the most famous long-term construction projects on the planet. I originally thought it was a matter of the complexity of the structure, but then I was told that things are more interesting here: the temple has been built exclusively on donations from parishioners all these years according to the author’s idea, and this is why everything has been delayed so much, but by about 2025 the cathedral is finally planned finish.

While I was filming this building, a crowd of protesters came here.

The protests were so massive that the streets were completely filled with people, as far as you can see.

Andorra is a microstate located high in the Pyrenees mountains, sandwiched between Spain and France. They don’t have airports, railways, no access to the sea either. But although getting to Andorra is not so easy (you first need to go to one of the neighboring countries, and then travel by land), tourism is the main source of income for this country’s economy. And also, to my surprise, Catalan is also spoken here (so, having gained independence, Catalonia would have become the second country where Catalan is a state language).

And Andorra la Vella is the highest capital in Europe. In fact it consists of two different cities merged together, the higher mountainous part is called Escaldes-Engordany (more on that later).

Medieval-looking old town. Actually Andorra is an old principality with more than 1000 years of history.

Multi-level roads (due to the relief of course).

The embankment of the small mountain river Valira, which created this entire valley.

But in the cold season, Andorra is covered with snow, and this city turns into a center for winter tourism.

As I told above, Escaldes-Engordany is actually a continuation of Andorra la Vella (it’s on the opposite side of the street in this photo).

Escaldes-Engordany is a younger city, so everything is a little better planned here. Of course, due to the relief, there are no straight angles here either, but at least all the streets are through, no dead ends, windy roads in the center, asphalt is everywhere.

Ground view for more details and understanding the size of the building.

There are many shopping centers and establishments in Escaldes, everything is more commercialized.

One of the tributaries of Valira, the historical part of the city.

These signs are everywhere here.

View of Escaldes-Engordany and further Andorra la Vella from the top of the valley. Should be very beautiful in winter, I have to come back for snowboarding once day.

A very beautiful city, which I wanted to visit for a long time. Valencia met all my expectations on the first day.

A postcard place, “City of Arts and Sciences” in the sunset.

This is perhaps the most recognizable complex of buildings in Valencia. It’s so cool to have such a point of interest, and they created it from scratch.

City streets in the daytime. Palm trees, green parrots and very bright sun even in autumn.

Many people here speak not in Spanish, but in Valencian (which, however, is so similar to Catalan that Valencian is considered to be its dialect). But at the same time, national sentiments are at a much lower level, the Valencians consider themselves Spanish first of all, and don’t understand the aspirations of their neighbors for independence.

Spanish farmer markets with their jamonerias are an art form in their own right.

In the conflict with Catalonia, Valencians actively support Madrid.

Five-meter street art is the part of the beauty salon’s facade design.

The local colosseum, one of those arenas for gladiator battles that have survived to this day from the times of the Roman Empire.

The Quart Towers were a part of the fortress wall of Valencia 500 years ago, but now located almost in the city center. They survived many wars, and the Valencians decided to keep them with the shooting holes.

Another interesting feature of Valencia is a long strip of parks, which starts at the port, passes through the City of Arts and the old town, and goes deep into the modern metropolis. The Turia River flowed here not a long time ago, but it dried up completely in recent decades, and in order not just to build up this place with new buildings, it was decided to turn its channel into a chain of parks called Turia Gardens.

The result is just awesome.

Gone away from the tourist areas.

And then didn’t want to go back. A very atmospheric city.

In the process of searching for tickets from Valencia to Madrid, I realized that with Ryanair it’s cheaper to fly from Valencia to Palma, and from there to Madrid, than directly. The things I do for the sake of economy, I had no choice but to fly to Mallorca. 🙂

I expected to see a resort town similar to neighboring Ibiza island, but the capital of Mallorca turned out to be a beautiful old town with a lot of history.

The highway that runs along the entire city waterfront.

Huge Palma cathedral (take a look at people strolling below for the contrast).

My layover was all day, so I had to walk with a backpack all the time, it’s a little hot, but air conditioners and ice cream save the situation.

Sa Riera Torrent in the center of Palma. Instead of concrete walls, they decided to create dense vegetation, and it’s just wow.

An unexpectedly beautiful and cozy city.

The scale of the capital.

Beautiful facades at the Main Square.

And ordinary streets are made in a very similar style.

Street name plates here always have unique pictures that depict cities, characters and events after which they are named. Given the size of the city, creating all of these plates must have been an extremely resource consuming task, but the result is impressive.

Breakfast cereal bar. There are so many options that your can get lost, it’s possible to come here dozens of times and try something new every visit.

A friend of my Couchsurfing host offered me to show a cool park. Even trees do make up here.

Royal Botanic Gardens adjacent to it.

The Crystal Palace. Initially it was an answer to the one in London, which unfortunately burned down in 1936. But the one in Madrid has survived all these years, despite the obvious fragility of a huge glass building.

Street statues have some meaning here.

You are not allowed to take pictures inside, so I did a little less than I wanted.

Some of the most interesting works in the museum are paintings by Hieronymus Bosch. A whole corner is dedicated to him.

There is an incredible amount of interesting details in Bosch’s paintings. I would love to look at them again at home, maybe even make a sticker pack for messengers of them. It’s a pity that after every click of the camera, the guards come and remind that it’s not allowed to shoot here (and I admire their patience, it’s impossible to force people to comply with such an absurd rule while every single phone around has at least two cameras).

Stopped for dinner and wine.

And bought some jamon. Ready to move on. 🙂

Andalusia is visibly different from the rest of Spain. The period of the Arab occupation left a mark on the culture of the entire country, but here it’s most noticeable, both in the cultural sense (in architecture, names, city planning) and material (many buildings of that period have survived, from huge alcazars to various small buildings like Arab baths).

The combination of white base and yellow accents is an architectural signature of the entire Andalusia.

Interesting city garden. The idea is that rainwater doesn’t soak into the stone surface, but flows down to the trees.

The capital of Andalusia turned out to be larger than I expected. It’s interesting that initially Seville was built by the Arabs and was an insignificant town of the Cordoba Caliphate, and only after the Reconquista it began to actively develop and grow.

It’s striking that the city is built very next to the Guadalquivir River, but not on it. Not very clear why the Arabs did this, but after the conquest, the Spanish had to dig this huge canal, which branches off from the river on the outskirts of the city, passes through the center, and then again flows into the same river. Moreover, the river itself is deep enough and flows into the Atlantic Ocean, which made Seville the main port for the preparation of colonial expeditions to America, and at the same time the main trade city of Spain, because this is where ships with cargo from America used to come.

Plaza de España and the City Hall of Seville. Somewhere here they filmed the backyard of the Naboo royal palace from the second episode of Star Wars.

Narrow streets of the old town.

Portuguese tiles can be found on facades of some buildings. Apparently, the city was strongly influenced by their western neighbors.

The tomato soup from Warhol’s paintings. 🙂

Royal alcazar. If you watched Game of Thrones, you must remember the palace in the capital of Dorn – it was here, the Seville alcazar.

Inner garden. Also featured in the GoT series. 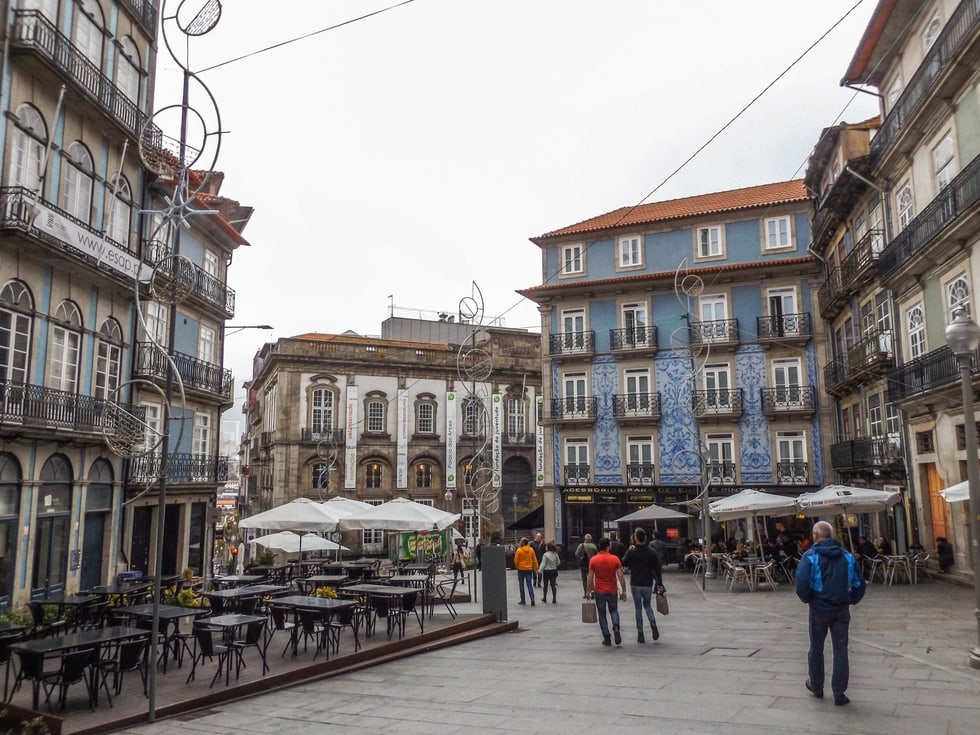