Finally, the juiciest piece of my Scandinavian story: this post will focus mostly on incredible Norway. In the first part, where I talked about Denmark and Sweden, you might get the impression that this is a region with quite conservative approach to life, so this time we will deal with the destruction of this myth. And we’ll also stop on the Åland Islands, an amazing place within ferry access from Stockholm, so I couldn’t miss it.

Exactly between Finland and Sweden there is an archipelago that belongs to the first, but culturally is much closer to the second—the Åland Islands. And although there was a great chance of losing the drone while taking it off the fast-moving ferry, the aerial view is mesmerizing. The Ålands consist of 6757 tiny islands scattered across the Baltic Sea, between which there are usually no bridges, but dozens of ferries run.

And Mariehamn is the largest city and administrative center of the Åland Islands. This is how one of its main streets, which connects the city port and the central square, looks like. The city, by the way, was founded by the Russians and named in honor of Empress Maria Alexandrovna, the wife of Alexander II.

The city center. There are several shops, a couple of restaurants and even a coffee shop.

The only shopping mall I’ve seen in this city. It’s called “Sittkoff Gallerian”. The Alandians know their history well, and remember with a certain warmth the times when they were part of the Russian Empire, because Russia invested a lot in the development of such an important outpost in the Baltic Sea. Now it’s a part of Finland, but with full autonomy in almost everything. Finnish warships cannot come here, they even entered the European Union on different terms than the rest of the country.

Also I went to the only coffee shop here, where for 5 euros they made me the worst coffee I’ve ever tasted in Europe. Nevertheless, the coffee shop had customers willing to pay money for it. Imagine opening a normal third wave coffee shop here? It will simply turn the life of Mariehamn upside down.

On the opposite from the port side of the island, there is a quiet harbor with fishing boats and small old yachts.

Such neat parks all around.

The only beach in the city. The water is always ice cold, but in summer people still come to sunbathe and swim.

There is even some street food.

All such sites were empty. I don’t know why, it was a weekend, so it’s weird.

Alandians usually live on small islands around the city, each village has several marinas, thanks to which the inhabitants of the archipelago move between the islands by ferries and their own boats. Small islands usually have no cars.

I took a bus from the ferry, drove to Stockholm, where I changed to another bus, half a day on the road, and finally here I am, in the new center of Oslo.

The city is very beautiful and modern. After other Scandinavian capitals, I didn’t expect Oslo to be so advanced.

An interesting art object in the bay. From a distance it looks very much like an iceberg, but if you look more closely, you can see a ship. The installation is called “She Lies”.

There is a beautiful island in front of the city, where many residents come to rest on the weekend.

The water is always very cold here, which brings a pleasant coolness during the warmer months, but in the gloomy Norwegian winter it must be not cool at all.

The old Akershus castle on a hill in the center of Oslo.

There are no fences, sometimes you walk along a pretty meadow, and suddenly see the edge of the fortress wall and the attitude is like 20 meters.

View of one of the central bays of the city.

Immigrant district of Grönland. Indians, Pakistanis, people from the Middle East live here. A couple of times I stopped by for a lunch: they cook incredibly tasty food here, and the check is 3-4 times lower than normal Norwegian restaurants.

A mosque, girls in hijabs, halal badges on shops. But in general, this is virtually the center of the city, and you can really live here, this is not some kind of ghetto.

In the late afternoon, it started raining, and the quiet mountain rivers exploded with noise and a fast stream of water.

Dozens of bars, art galleries, workshops, cultural centers. If I were choosing my favorite area in the city, I would probably stop here. The Norwegian Kreuzberg.

The new Aker Brygge district. Everything is beautiful and expensive here.

A shopping center with upscale boutiques. Upstairs are the offices of international companies such as Google Norway and others.

A network of canals runs through the entire area, so you can go to work on a yacht and park it right in front of the office.

Gustav Vigeland Sculpture Park. Lots of cool shit like this pillar made of people.

But there are also beautiful works.

There are several world famous works by Norwegian artists. The “Scream” by Edvard Munch stands apart.

In general, the museum is small, but the concentration of cool works fully compensates for this.

In Oslo, I met another guy from Ukraine, we agreed to go further by hitchhiking together. On the way, we were picked up by the latest Tesla cars, so it was really with comfort.

Then joined some stern trucker, who decided to come with us to a cool city on the way during the obligatory break in work.

This is how we first saw the Norwegian province.

In general, the same consistent style and high standard of living.

The city is built on the hills along the coast of the North Sea, so there is a beautiful relief, but a constant cold wind too.

A large underground parking and a shopping center were built into one of the rocks. In general, Mandal is cool, but after 40 minutes had to go further.

Made it to Stavanger by the evening. This is the capital of the Norwegian oil industry, the foundation of the material well-being of this country.

But there is also an old center with beautiful streets here.

Small harbor in the center. There are only yachts and oversized ships here, the main port is located in the neighboring area of ​​the city.

Oil platforms are visible directly from the city.

It is immediately clear that this is a city of oil workers.

And a mural near the main port. From here we will take a ferry and head towards our first fjord.

There was a sign near the entrance that today it’s extremely windy and so climbing is not recommended. But we were already here, so decided to try at least.

The road to the famous Pulpit Rock is a couple of hours of hiking through picturesque valleys and rocky paths.

On the way there are small mountain lakes.

And finally we are here. The height is stunning, about 600 meters.

The fjords turned out to be a truly majestic phenomenon, absolutely no rocky canyons can compare with this beauty and scale.

But the wind was really stormy, as the sign at the entrance warned. If you stand on the edge of a cliff, such a wind can easily throw you off.

Almost crawled to the edge of the cliff, and decided to just lie down and eat some tasty treats.

(what else to do when you are on the verge of falling off a cliff 600 meters high?)

Went downhill. There were beautiful houses with grass on the roof, just like in Iceland.

Selfie from the drone. I was afraid to launch it on the top, because the wind was really strong.

Saw a couple of examples of cool modern churches. Just like in Iceland with their space-looking temples.

The road often ends with a sea or a fjord, so hitchhiking here is very special: you often have to change to a ferry, cross the bay, and then catch the next ride.

The nature of Norway is simply incredible. For the sake of this alone, I will definitely return to this country more than once.

Again the end of the road, again the ferry, again we have to look for a new car.

Finally got to the town of Osøyro, this is a suburb of Bergen, so the mission is virtually completed.

I decided not to miss the opportunity, and walked a little more around the Norwegian province.

There are always numerous electric cars in parking lots, and the chargers are almost everywhere. This is how it has to be!

The second largest city in Norway.

Gingerbread houses all around.

Beggars are always immigrants, the locals completely ignore them.

Hot dogs are something that simply cannot be missed in Scandinavia.

Took the one with cranberry sauce and reindeer sausage.

The city is surrounded by high hills, so now it’s already growing up.

Some street artist paints these murals and small drawings of colored mythical creatures in the same style all over Scandinavia.

Nice park near the city center.

From time to time you can see different figures, such as for bikes.

Yet another work of that street artist.

A piece of San Francisco in Norway.

The city gallery consists of several buildings, which can be visited with the same ticket.

Typical landscapes here, but for some reason I’m not used to seeing this in pictures. We have to expand the boundaries of our expectations.

A lot of beautiful things, the gallery is definitely worth a visit.

I decided to take another walk around the old city, it’s really cool here.

There are memorials to homeless people and other atypical characters.

Even rain 300 days a year cannot spoil the coolness of this place.

Added this city to my favorites list. And there are so many steep fjords around! I’ll definitely come again.

Hitchhiking on my own.

I decided to take a break and walk around the random town where I was dropped off. It turned out to be some kind of industrial center.

And there is also a path right outside the city that goes high into the mountains.

As usual, after the ride you have to change to the ferry, and then you look for the ride again. The process is already expected, but still very nasty.

The city built on islands in the bay.

Ålesund has a very stylish center.

And, of course, its own inner harbor.

The depth is 10 meters, the water is crystal clear.

Someone has equipped an arbor with chairs and tables. I want this at home.

In Ålesund, you can see some weird monuments and street installations.

For example, such ones.

But the views cross out any oddities.

The city airport is located on another island, I arrived there in advance in order to have time to go rollerblading to meet the sunset. At some point, the road went into a tunnel, and the airport runway was on top. Watching a huge Boeing landing on you is a sight to behold.

Thought I was alone, but some friendly otter decided to join. The cutest company ever. 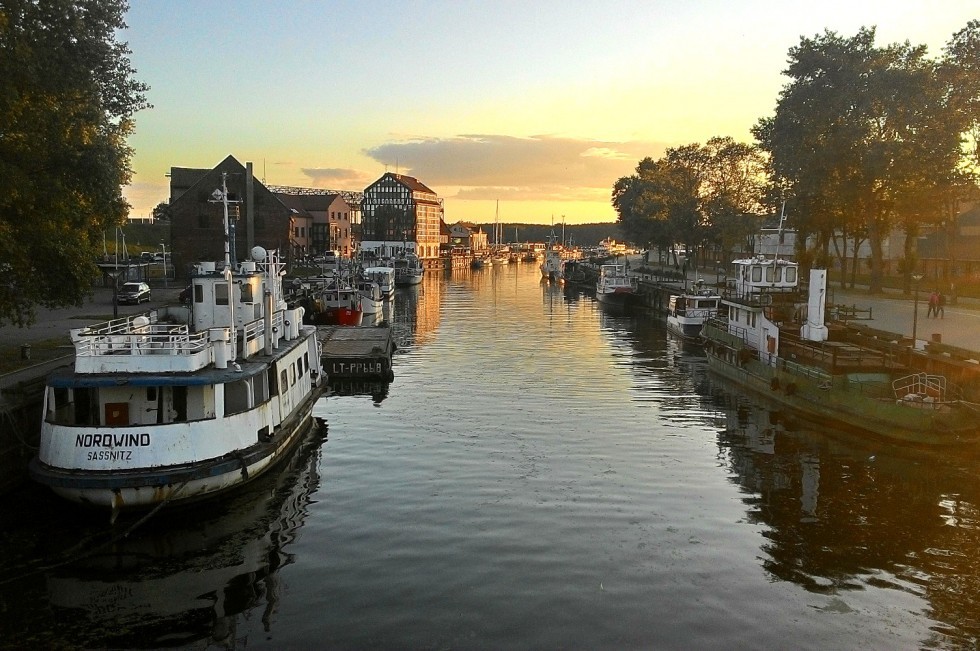